There’s no doubt about it — there’s a lot to love about Ipe! But this premium tropical decking species comes with a few extra challenges you’ll want to know about before you install your first Ipe deck. As long as you anticipate these differences that come with working with such an extremely hard, dense species, you’ll be able to successfully install a tropical hardwood deck that will not only awe onlookers today but will stand strong through thousands of tomorrows!

Buying Air-Dried Ipe for Exterior Use

Now, don’t get scared: Ipe is certainly quite a stable species. However, when you know that, you might be tempted to construct with Ipe thinking that it could never warp — and that would be a huge mistake. It would be a mistake because by constructing with Ipe under an incorrect assumption about its properties you could more easily end up with warped Ipe.

Tropical Ipe decking boards are typically not kiln dried; intended for exterior use, they are air dried to a moisture content somewhere between 14 and 18%. (There is kiln-dried Ipe available with a moisture level below 8%, but that lumber is intended for interior use; in an environment that isn’t climate controlled, the kiln-dried Ipe boards would be prone to soaking up too much moisture due to higher humidity levels, threatening its stability.) By using air-dried Ipe decking with a higher moisture content, you can keep it relatively stable, eliminating extreme movement. But that’s only part of the solution.

Allowing Your Ipe Decking to Acclimate

In addition to using air-dried Ipe decking, you also need to incorporate an acclimatization period into your job’s timeline. After your Ipe decking arrives at your job site, be prepared to give it a few weeks to acclimate to its new environment. Storing the boards out of direct sunlight, stacked and stickered for proper air flow, will allow them to come into an equilibrium with the surrounding moisture levels. Depending on the time of year and other factors, your boards may expand up to ¼” during that 2- to 3-week period! Of course, that kind of movement will contribute to installation and how you plan gaps (a topic for another day). By allowing acclimatization to take place prior to installation, you’ll be able to plan effectively for that and reduce the chances of warping.

As an extremely hard lumber species, Ipe has raised grain that can be extremely rough, especially when it is quartersawn. Quartersawn Ipe not only maximizes the stability of Ipe but also showcases its gorgeous, consistent grain; however, it also exposes the medullary rays, which once carried nutrients to all parts of the tree. (While all lumber species will include medullary rays, these structures become more noticeable in harder species, such as Ipe.) These particularly dense structures cannot be easily smoothed out with typical planing; instead, they require a sander. 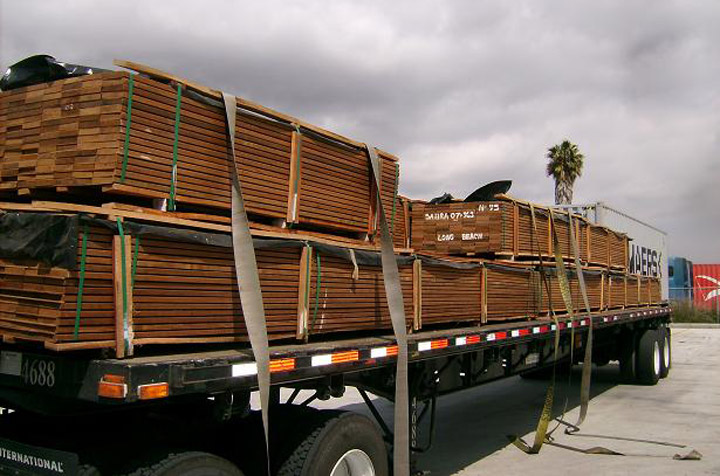 We’ll continue to look at how you can avoid warping as well as other potential problems as you install your new Ipe deck in our next post.

We have provided fine lumber for notable projects throughout the world, including the Capitol building, Supreme Court building, Smithsonian museums, the White House, and celebrity homes nationwide. END_OF_DOCUMENT_TOKEN_TO_BE_REPLACED